Mementos from 1974 (Shared by Ian Baines) 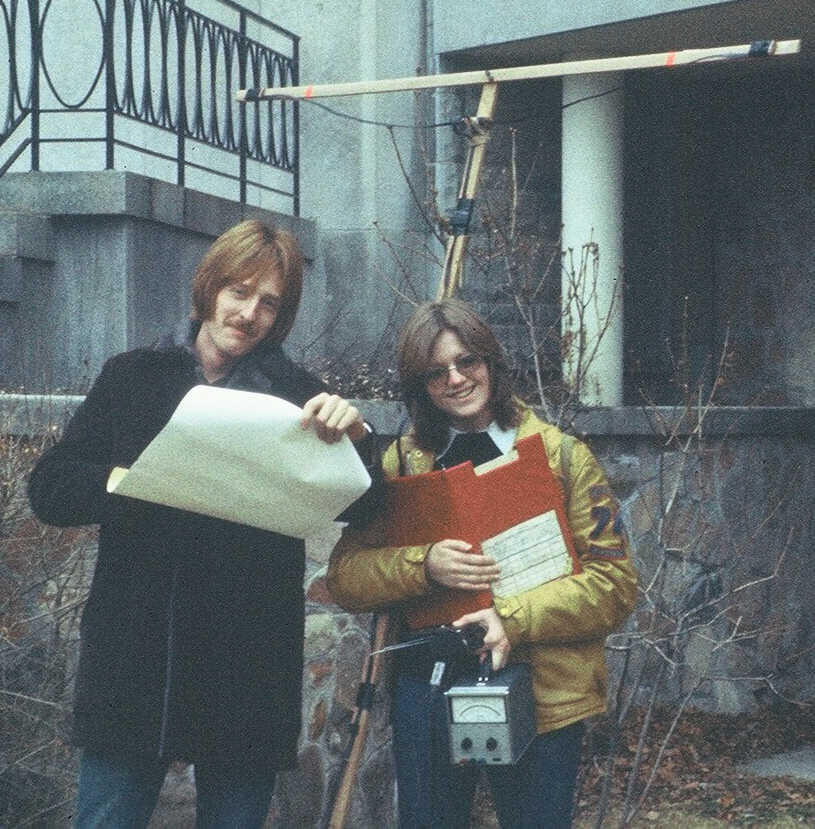 I was an undergraduate and graduate student in Queens Electrical Engineering, which was based in Fleming Hall.   At that time the CFRC transmitters were located on the third floor of Fleming Hall.   They were maintained by the radio shop in the basement of Carruthers Hall, however as student Chief Engineer I had considerable input as well.   In addition to being a graduate electrical engineer (Sc. 74) I had also worked as a radio engineer in CHFI and CFTR Toronto as well as the CBC Network building on Jarvis Street in Toronto.   So I was familiar with repair of broadcasting equipment, including studio, transmitters and antenna.   This took some of the load from the Queens radio shop and allowed me to indulge in my passion for antique radio equipment.

During my time with CFRC, 1970 to 76 there were two on-air stations.    One on 1490 AM with a power output of 100 watts and a Marconi or T type antenna between Ontario and Fleming Halls.   One on 91.9 FM with 1,000 watts and dual dipole antennas on a tower on Fleming Hall.   I conducted signal tests on both stations as part of my undergraduate and graduate studies.   The range of AM was about 20 km and could be heard throughout Kingston and the Islands.   It started to fade out west of Kingston on the 401 out of town.    It could be heard in Gananoque, but faintly.  FM had much greater range, and a better audio quality.  It was a mono signal and could be heard from Napanee to Gananoque and as far north as Sharbot Lake.

The AM transmitter was an old (1948 vintage) RCA BTA-250L which had been donated by a Kingston radio station, where it had served most of its career.   This model could last forever as it was so robustly constructed.  In fact, amateur radio operators still use them, and I saw one for sale this year.   While capable of 250 watts, our license only allowed 100.  The station was on air only after 6 pm on Thursdays and Fridays, until midnight.  This was so as not to interfere with electrical engineering experiments.  It ran all day Saturday and Sunday, shutting down at 2 am.  The most popular shows were on Friday and Saturday nights, from 8 pm onward. That is when the students were partying or studying (who are we kidding?) and wanted to listen to commercial free rock.   Thursday and Sunday evenings were for more serious shows.   During the day the FM station carried mainly classical music.   AM was for rock and talk.

The FM transmitter had been donated by Westinghouse and was an experimental model.  It was not terribly stable and needed constant watching.  The AM transmitter was a rock and almost never failed.    I think that the FM transmitter dated to the late forties as well, a time when Westinghouse was developing commercial FM units.   That was before stereo, so the transmitter was monaural.   With another graduate student we tested it using an experiments stereo modulator of our own design.   The results were not impressive.  At least it had the ability to produce high quality sound, which the AM transmitter lacked.   AM frequencies rolled off around 10 KHz, while FM could produce 15 KHz.   The improvement in treble and bass was considerable, and students had the latest Sony and Pioneer stereos in their rooms.  They tended to turn it up loud.  CFRC obliged by giving them lots of good rock music to heat their speakers.   On a Saturday night you could hear the sound of my Nocturne show coming from most residence buildings.   Quite loud in fact.   On Saturday night we went simulcast and broadcast the rock programs on both AM and FM.  Most of the day however, they were separate programs.

The photos attached were taken in 1974 with my 35 mm slide film camera.